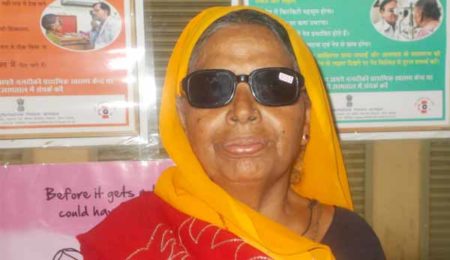 It’s normal to think about blindness as a personal condition. After all, it’s easiest to imagine how it would affect your life. But for Surajkali, blindness stole not just her independence, but her 10-year old grandson’s, too.

Surajkali is 65 and from India. She lives in Rurwahar Village in Kanpur, Uttar Pradesh. Her husband is a farmer while she manages their home. Two years ago, her eyesight began to fail. Eventually, she couldn’t see at all. Her grandson, Suraj, had to guide her around her home, to the store and even to the toilet.

Poor Surajkali! She could no longer do her chores and tasks, and poor Suraj, who had to drop out of school to care for his Grandmother. Surajkali needed him so constantly that he couldn’t play with his friends. Imagine how sad they both must have felt.

Luckily, Surajkali was visited by a community health worker. Going doorto-door, the worker was one of many workers trained under Operation Eyesight’s Community Eye Health model. In Kanpur, this is in partnership with Dr. Jawahar Lal Rohatgi Eye Hospital.

The cataract in both of Surajkali’s eyes were soon removed. Now she can see again, thanks to our amazing supporters! She has her independence back and can do her daily tasks. Meanwhile, Suraj has returned to school. He’s happy that he can go out and play with his friends, something every child should be able to do. What’s more, with an education, Suraj has hope for a brighter future. Imagine their joy!

Both Surajkali and Suraj have happy endings thanks to our supporters! We couldn’t do our work without their generosity. From us and everyone our supporters are helping, we say a giant THANK YOU!