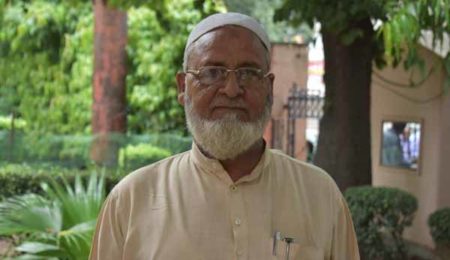 Did you celebrate Father’s Day on Sunday? If you’re anything like me, your father is someone special who took care of you, helped shape your childhood, who guided you through life’s challenges and taught you some important lessons that you still carry with you today.

Maybe some of you reading this are fathers yourselves, and if so, you might find yourself relating to Wali, a father from India with a young son whose dreams for his future and his career are larger than life.

Today, Wali is a happy father and husband who supports his family with his tailoring work. And that’s thanks to the generosity of people like you!

Not so long ago, Wali was blinded by cataracts in both his eyes, but your support made it possible for him to journey out of darkness.

Wali wanted nothing more than to give his son a good life, to help him make his dreams a reality.

The early morning routine before school was Wali’s favourite – Helping his son get ready and then taking him to class was his favourite way to start the day.

When Wali’s vision faded, so did his morning routine with his son.

“I was extremely fearful. I thought I would be confined to the four walls of my house and my dear wife would have to take on financial responsibility four our family.”

As a tailor, Wali’s eyes were vital to his work and his family’s livelihood.

But thanks to the support of people like you, Wali was reached by a community health worker trained by Operation Eyesight. She screened him and referred him to our partner, the Dr. Shroff’s Charity Eye Hospital where he was diagnosed.

Although Wali was nervous about surgery, once he received treatment, he got his life back. Now he takes his son to school, and he’s back to supporting his family with his tailoring!

That’s a pretty special Father’s Day gift, don’t you think? Wali got his sight back, and now he can support his son financially so one day he can go to school and make his dreams come true.

It may be belated, but it’s not too late to show Dad you care. Why not send him a personalized eCard and bring him a bit of joy today while giving the Gift of Sight at the same time?