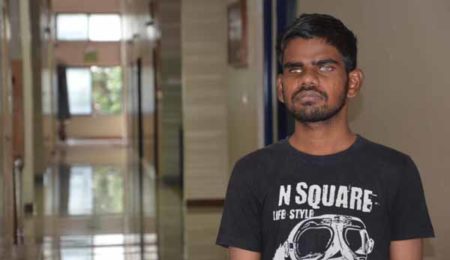 Shivsagar’s future looked bleak (photo above). With his sight fading and his hope with it, his mother feared the worst. But compassionate people like you came to the rescue, giving Shivsagar hope for a brighter future! After his surgery, his sight has been restored.

Can you imagine what it would be like to be a young man in a remote village, watching your parents struggle to bring food to the table, and realizing that you’re losing your sight?

And imagine what it would be like to be a mother living in poverty and watching your son go blind?

When Shivsagar started to lose his sight as a child, his mother didn’t have any other option but to take him to a healer in the village. Their village did not have a healthcare centre, and Shivsagar’s mother couldn’t afford the bus fare to the nearest hospital, let alone the expensive sight-saving treatments. Besides, taking Shivsagar to the hospital would cost her a day’s work and cost her family a day’s meal. So, she did all she could – placing all her hopes on the village healer and praying for her son’s remaining sight.

Sadly, the folk healer’s medicines had no effect. Shivsagar’s mother helplessly watched her son’s world go dark around him. He became alienated and eventually he was forced to drop out of school.

In many communities in India, men are expected to look after their parents when they grow old. However, instead of growing up to become a breadwinner for the family, Shivsagar depended more and more on his mother for his daily needs. But one day everything changed!

Years after Shivsagar lost his sight, his sister got married and moved to the city of Bangalore with her husband.

Operation Eyesight established a vision centre in Bangalore and Jyoti, one of our community health workers, went door-to-door in the area screening households for their eye health. As luck would have it, Jyoti met Shivsagar’s sister. When Jyoti heard about Shivsagar, she urged his sister to bring him to Bangalore.

So 20-year-old Shivsagar travelled 700 kilometers to his sister’s place in Bangalore and met with Jyoti. Jyoti referred him to the vision centre and the hospital, where the doctors identified the damage to his cornea and offered a cornea transplantation surgery at an affordable, subsidized cost of less than 100 Canadian dollars.

Cornea transplants need eye donors. After being referred for the surgery, Shivsagar returned to his village and waited for a donor. The long-awaited call came a year later!

Two weeks after the surgery, he could see his surroundings again, and his sight would keep improving for the next three months.

Shivsagar is at his sister’s recovering from his surgery, ready to head home to take on his new life. Once he returns to his village, he hopes to find a job to support his mother.

It’s a new beginning! Not just for Shivsagar, but also for his mom. Now she can rest easy knowing that her son can provide for their little family, and she knows that his future is bright and full of hope – all thanks to the support of incredible people like you!

Thank you so much for your incredible gifts that are helping to restore sight and hope for people like Shivsagar! There are still thousands like him who need your help. Please consider donating today and give the gift of sight to more people in need – For All The World To See!