Skip to content
People like you are making magic happen with the gift of sight!
January 22, 2019 Elizabeth Roden, Director, Marketing and Communications India 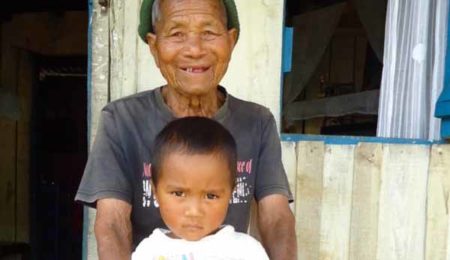 Stenwell lives in a small village in India, and he loves nothing more than to spend time playing with his grandchild. His family means the world to him, and he does his best to help take care of them. He helped contribute on the farm, but because that wasn’t enough to sustain his family, he also worked odd labour jobs in his village whenever he had the chance.

When his vision started to blur, Stenwell didn’t think much of it at first. He figured it was just a symptom of his age and a normal part of growing older.

But he became increasingly concerned as his vision deteriorated over the next three years. He realized something was very wrong, but with his family’s difficult financial situation, he knew he couldn’t afford to seek treatment. Without any options, Stenwell feared his blindness was a punishment from God.

This is where someone just like you stepped in to help. Thanks to our donors’ support, our partner, Bansara Eye Care, held an eye screening camp in Stenwell’s community. Operation Eyesight-trained  community health workers went out into the village to inform everyone that there would be an eye screening camp. They reached every household, including  Stenwell’s.

“When the health worker explained that I could get help for my condition, I was filled with new hope,” says Stenwell.

At the eye camp, Stenwell was diagnosed with cataracts in both eyes. He was told that two simple surgeries could restore his sight, and that the surgeries would be free of charge.

“I was anxious about the surgery, but the community health worker explained that the surgeries would be minor procedures that would help me see clearly again,” recalls Stenwell. “They were patient with me, and I felt I could trust them fully.”

For Stenwell, it was like magic to SEE again after receiving surgery. People like you made that possible! Stenwell was reached through our community eye health program and received the treatment he needed for free.

“I am extremely thankful to the people who helped me see again,” says Stenwell. “Coming from a humble family I never thought that I could get hope for my vision. Had it not been for the community health workers and the doctors of Bansara Eye Care, I could’ve gone blind permanently.”

Stenwell is now back to playing with his grandchild and helping his family with the farming, while taking time to garden when he wants to relax. His life has been transformed and he’s regained his independence, all because of our donors. Thank you!