Narok County in Kenya is inhabited largely by the Maasai people, who retain their nomadic, pastoral culture. The county has a population of over 850,000, and the majority of the population lives below the poverty line, which makes it difficult for them to access health services, especially eye care.

Operation Eyesight has been working in Narok since 2007. In 2013, primary eye care services and school eye health services were boosted by support from the Seeing is Believing (SiB) Child Eye Health project. The goal of the project is to reduce avoidable blindness and visual impairment in children in East Africa.

In 2015, over 112,000 children were screened. Of these, almost 1,100 were referred from schools to Narok Hospital Eye Unit for further care. Another 539 children were treated for various conditions such as refractive error, cataract and conjunctivitis.

This region faces the same problems as other Operation Eyesight areas of care, including poverty, inadequate numbers of eye care workers, a lack of basic equipment and supplies, and scattered health care facilities. Unfortunately, the delayed care caused by these problems commonly leads to blindness, especially amongst vulnerable children.

In 2015, over 75,000 children were screened for eye problems, and over 2,300 were referred from schools to Kitale Hospital Eye Unit for further care. A total of 4,202 children were treated for issues such as refractive error, cataract, conjunctivitis and corneal scarring.

Kitale Eye Unit covers the Trans-Nzoia County in the northern part of the Great Rift Valley and extends its support to West Pokot County. The two counties have a combined population of approximately 1.3 million people.

Kitale District Hospital is the busiest secondary-level public hospital in the zone, with a comprehensive eye care program serving the surrounding districts. Access is very difficult for much of the region’s dispersed population. The long distances to health centres are a major barrier for those in need of eye care services in the area.

To tackle these challenges, Operation Eyesight built a new eye clinic with an out-patient section, operating theatre and wards at Kitale Hospital. We also renovated and equipped Kapenguria Eye Unit, a satellite clinic for Kitale Eye Unit, with funding from Seeing Is Believing.

Thanks to our generous donors, we’re supporting these facilities’ outreach expenses and providing them with the medicine and supplies they need to meet their surgical and screening targets. We’re working to build the capacity of Kapenguria Eye Unit for West Pokot County, with the goal of it becoming independent of Kitale Eye Unit.

Moi Teaching and Referral Hospital (MTRH) is the second-largest public referral hospital in Kenya. It serves the northern part of the Great Rift Valley, an area of approximately three million people.

The most serious challenge to providing health and eye services is the region’s vastness and the distance people must travel to obtain health care. With many families living in poverty, travel is prohibitively expensive and taking days off from work or farming may be out of the question.

Operation Eyesight and Kenya’s Ministry of Health are working to overcome these obstacles by providing training to increase the number of patients served and building up health services in rural areas. Training of additional primary eye care workers, ophthalmic nurses and an ophthalmic clinical officer has increased MTRH’s services.

The hospital has been mentoring eye unit staff at its satellite clinics of Uasin Gishu, Iten and Kapsabet to provide better care and referral services. Iten and Kapsabet Eye Units were renovated by Operation Eyesight with funding from Seeing is Believing (SiB). They provide a wide range of eye services, including cataract surgeries. A new eye unit is under construction at Huruma, partially funded by Operation Eyesight through SiB and the Uasin Gishu County Government.

Operation Eyesight has been providing support to Narok District Hospital, which serves as a secondary health care facility in the Narok region. The hospital’s eye unit personnel regularly go on outreach programs to the surrounding communities, where satellite clinics have been established, reaching areas where no eye care or treatment was available before.

Community engagement is also an important aspect of the hospital’s work, and eye care is being enhanced through partnerships with community-based organizations, government and NGOs. In 2014, we equipped Naroosura Eye Unit with new surgical equipment, part of a plan to upgrade the eye unit.

Trachoma is the most common and widespread eye problem in Narok County and in 12 other counties across Kenya’s arid and semi-arid areas. Transmitted by flies and made worse by both cultural and environmental factors, the disease affects more than 30 percent of the population. Trachoma infects the eyes and scars the eyelids, which over time causes the eyelashes to turn inwards and painfully scrape against the cornea. Left untreated, trachoma leads to irreversible blindness.

A major step in the elimination of trachoma is the provision of clean, protected water sources. Since our program began, we’ve created 51 water points, including boreholes and water catchment systems.

In the village of Ongata Naado, where our first borehole was drilled, an impact assessment in 2010 showed that the prevalence of active trachoma was reduced from 30.5 percent to 11 percent in the overall Narok County.

Our work in Narok County is supported by The Queen Elizabeth Diamond Jubilee Trust Fund. Together, we’re working to eliminate trachoma in Kenya.

Half a million people live in Kenya’s West Pokot District. Most of them are from the Pokot tribe. Mainly pastoralists, they face many of the same challenges as the Maasai people in Narok District, often suffering from painful, blinding trachoma as a result of poor sanitation, a lack of clean water and close proximity to fly-attracting livestock.

West Pokot is one of the trachoma-endemic districts surveyed in 2014 by the government of Kenya. As a result of the success of our Narok District Trachoma Project, Operation Eyesight began working in West Pokot in 2010 to also eliminate the disease there.

We’ve begun to transform the environment to prevent trachoma – rather than just treat its symptoms – by drilling boreholes and educating communities, especially schoolchildren, on the importance of face washing and personal hygiene in preventing the disease. 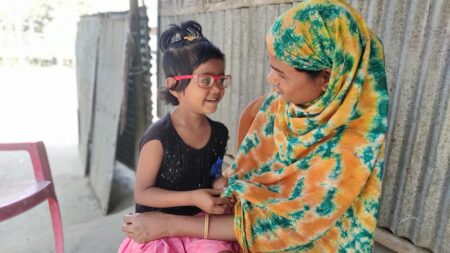 The warm glow of a diya means different things to different people, across faiths and traditions.  Whether... 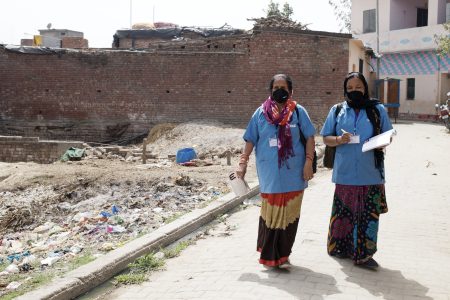 Today, nine-year-old Aaliya from the village of Vallabhnagar in Rajasthan can go to school and play with...